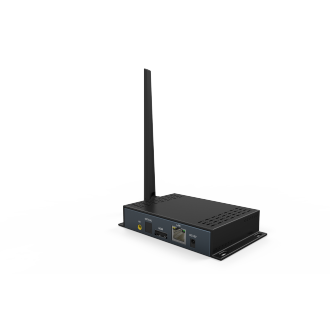 The iMedia Interactive XDS 4K is a robust 4K ultra high definition (UHD) digital signage display generator. It features a tremendously straightforward interface designed and built by AEI for consumers and engineers alike. It includes all the connectivity you need such as HDMI out, High Definition HDMI live in, gigabit Ethernet, new dual band super-fast WiFi IEEE 802.11ac and more.

As a remote digital signage management console it allows you to create an on-board digital signage system which integrates Internet based web pages with Live Streaming TV and news feeds. Because the console is built around on-board fast hardware codec management it means that you can create signage remotely and utilize live video steaming content from the internet or via the Live HDMI input feed. It connects to a flat screen display via HDMI ver 2.0 and presents a display from a choice of interfaces from the built in custom interface, any third party android app, a web page or even an external HDMI source. The web page service is a full screen facility where you control the HTML page on your own server (or a clients server) and display the URL in full screen. Alternatively simply use the built-in iMedia Quantum XDS signage application for fixed template selections which can include live video & XML feeds etc or alternatively use any third party application compatible with the Android operating system such as Xibo.

You can access and manage the generator remotely for signage edits via the signage user interface. As a fail safe backup you can also access the entire user interface via the internet with a dedicated login facility at http://www.digisender.tv/ which then allows you to use remote desktop from a windows machine using the RTP protocol. There is no need to worry about ISP's changing the IP at the installed location as the interface automatically caters for this during login.

Because the system features a built in quad core processor plus a quad core Mali-T7 graphics co-processor you can display the most vibrant fast action 3D graphics at resolutions up to 4K at a maximum of 60 fps. You have the flexibility to access media from any internet live TV feed available, internet radio service, news feed, financial market feeds as well as the on-board SD card slot. There is also the ability to connect USB-OTG devices such as Interactive touch foil film for window displays, USB Hard Drives and similar bespoke interface devices and support Android. When accessing 4K internet based live streaming TV it utilises built in robust hardware decoders including the new H265 codec expected to take centre stage from 2015. H265 allows definitions up to 4K and it is relatively low bandwidth compared to similar feeds using earlier codec technology. H265 is expected to be utilised by Youtube, Netflix and other broadcasters and boasts a 4K transmission with under 10mbits of bandwidth. With the added option of an Android interface you have no barriers to developing the next generation of signage display and with an Antutu score of over 40,000 we truly mean a 'no barrier signage solution'.

If you are looking for a basic or fully comprehensive HD signage solution which is easy to set up then you need the iMedia Interactive XDS 4K Digital Signage Display Generator!

Imedia Signage Pro Interface & DigiSender TV Inetrface Included. Digital Signage Management interface plus Smart TV functions capabilities, with access to 500 TV Channels and over 50,000 radio stations available at the click of a button. This includes UHD 4K services from Youtube, Netflix, Filmbox and sports services such as Red Bull TV and and so on. As more and more services come online we have built in some very important features that mean the next generation of High Definition services will already be at your fingertips.

If you are embarking upon a complex project hosted on board then you can integrate your own application with the various social networking API tools provided by many apps on the Play-store including Facebook, twitter or Google+. Being Android and Google compliant you also get the full suit of google apps including Gmail, Google Maps, Play-store, Chrome and much more.