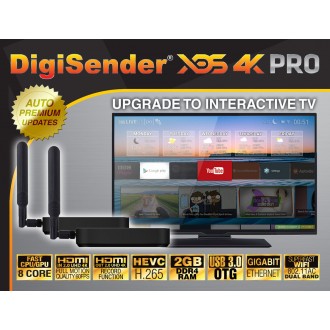 The DigiSender XDS 4K is a combined 4K Ultra High Definition WiFi HDMI video sender and Android set-top box system. It will transmit any HDMI source such as a satellite receiver or DVD player in extremely high definition.

It also provides both TVs with SUPERSMART TV capabilities, with over 500 TV Channels and over 50,000 radio stations available at the click of a button. This includes Ultra High Definition 4K services from Youtube, Netflix, Filmbox and sports services such as Red Bull TV and and so on. As more and more services come online we have built in some very important features that mean the next generation of High Definition services will already be at your fingertips.

Connect with friends and family using your favourite social networking apps such as Facebook, twitter or Google+. Instant message, talk or video call using apps such as Skype or Viber. Send emails, surf the net and much, much more.

Customise the units by adding apps available from the Google play store or download and play the latest games.

How it works
When you connect the XDS 4K to your local Internet service you are then asked to create a secure account. This account is what you use to access your services on any machine using Chrome and by simply visiting our access site at https://easylife.com . The devices presence is registered on our servers via a secure connection and uses Real Time Communications (RTC) protocols.

Real-Time Communications (RTC) provides us with high-quality applications which we have developed for the browser, mobile platforms, and Internet of Things (IoT) devices, and then allows them all to communicate securely via a common set of protocols. This initiative is a project supported by AEI, Google, Mozilla and Opera, amongst others. It receives regular updates automatically and without the need for any down-time, restarts of other human intervention.

If you make a connection between two XDS consoles over the Internet (each using different Internet services), your bandwidth will automatically determine the picture quality. A fast broadband service can in theory achieve 4K Ultra High Definition quality. A connection between two XDS consoles which exist on the same WiFi network will not pass the streams over the Internet and the stream connections will remain on your local LAN thus reducing latency and enabling the best possible picture and sound quality. This is sometimes referred to as machine-to-machine (M2M).

Our RTC and M2M technology does not require any special settings on routers or firewalls. Your network can remain fully secure and any Firewall protection can remain in force and you will not be prompted to open ports or other such requests which can compromise your network.

DigiSender XDS LIVE OS is an optional premium feature that enables you to control your Video & Audio sources whilst you broadcast LIVE to your audience on Social Media, Embedded on your own web page or made available for public viewing at easylife.tv, features under development that come as standard and automatically added as we develop new features and functions in the future. Allows you to preview your video sources such as HDMI, USB as well as monitor your audio level output prior to and during broadcasting. It is compatible with HDMI 1080p Cameras, USB Cameras, Line-in audio and BT audio. You have the flexibility to add various sources and view and adjust the sources before you start broadcasting. During broadcasts you can switch video sources and maintain a connection to your chosen audio source ensuring your viewers receive the best possible presentation

DigiSender XDS LIVE OS is launched via conventional apps on your desktop but is intrinsically linked to our servers for privileged access to premium services. Our unique broadcast streaming technology means that you need only a 1Mbps internet upload speed for 1080p Studio Linking Services or a 3 to 5Mbps internet upload speed to distribute 720p live video content to unlimited viewers in a way you choose. 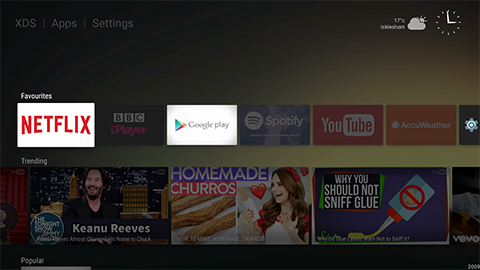